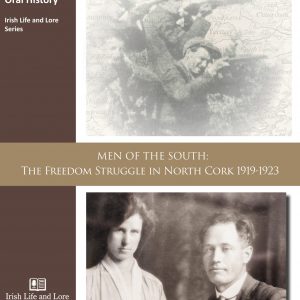 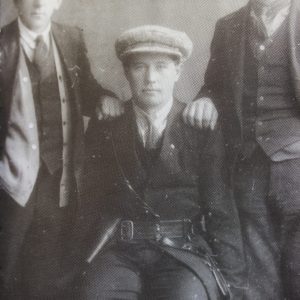 (1922, Late July): He discusses the attack by H-Company 6th Battalion, 2nd Cork Brigade on Bruff Barracks and the Absolution of Republicans granted by a priest prior to their attack on the barracks. In the first clip, Jim O’Riordan describes this incident.

(1922, 2nd week in July): Fr. Ó Ríordáin explains that in early July 1922 Sean Moylan, with a force of 200 Republicans, went in lorries from Limerick to Waterford and New Ross. His father was involved in a skirmish at the home of a Mr Hamilton, an ex-British officer and committed Unionist. Some Republicans were in search of food but got more than they bargained for. 2nd clip, Jim O’ Riordan describes this event and also the arrest, trial and fining of Hamilton before a Sinn Fein Court. He also recalls the disappointment felt by the Republicans at not having crossed the River Slaney.

(1922, Late July/EarlyAug.): In late July or early August 1922, in Ash Hill Towers Camp the Republicans constructed a make-shift armoured car. After Mass on the Sunday they decided to try it out. The event is recalled by Fr. O’Riordain. He describes the Republicans’ arrest of 16 Free State soldiers during a skirmish at a ‘big house’ near Killmallock. In the 3rd clip, Jim O’ Riordan describes this arrest and the transport of the soldiers to Buttevant.

(1922, Sept. 7th): Fr. Ó Ríordáin explains that on September 7th, the first attempt was made to dislodge the Free State garrison from Newmarket barracks; a second attempt also failed. In the 4th clip, Jim O’ Riordan recalls the fact that they failed on two occasions to take the barracks.

On the night of the first attack on the barracks, the Republicans stayed in Sean Moylan’s family home, as Fr. Ó Ríordáin explains. In the 5th clip, Jim O’Riordan recalls that night and also talks of the second attempt at taking the barracks.

(1922, Oct. 16th): Fr. Ó Ríordáin describes an ambush by the Free State Army on a group of Republicans at Collins’ of Glenamuckla on 16 October 1922. His father and other Republicans were captured. In the 6th clip, Jim O’Riordan describes that event.

(1922, Oct. 17th): Jim O’Riordan reminisces on the aftermath and their transfer, in lorries to Limerick Jail. In the 7th clip, being “red-inked” for execution on arrival, and receiving food parcels from Nancy Murphy of Cumman na mBan. He also discusses the digging of escape tunnels.

(1923, Jan.-Feb.): Fr. Ó Ríordáin explains how his father escaped execution by changing his name with a comrade and managing to be transferred to the Curragh Camp. In the 8th clip, Jim O’Riordan describes the plan he executed. He also describes his time in Hut 14, Tin Town in Curragh Camp, and the digging of another escape tunnel there which was discovered a day prior to the prisoners’ planned escape.

1923, Spring/early Summer): Fr. Ó Ríordáin describes how his father, still under threat of execution if discovered, explains that he, yet again, managed to escape this fate. In the 9th clip, Jim O’ Riordan remembers that momentous time.

(1923, December): Most of the Republican prisoners were released before Christmas 1923, and his father returned home to Kiskeam on December 19th, as Fr. Ó Ríordáin explains.