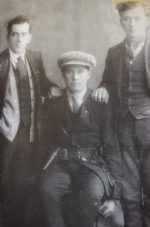 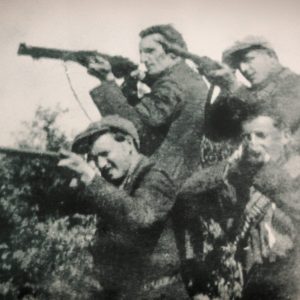 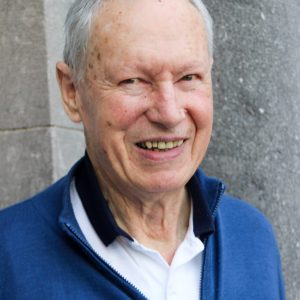 In this recording Fr. Ó Ríordáin contextualises events which occurred after the Civil War, and describes his father as a raconteur. He discusses his father’s return to farming life, and the raised level of political tension in the area. In this clip, Jim O’Riordan talks about meetings at Young John’s (John Casey, East End, Kiskeam), and an encounter with the Blueshirts in the 1930s.

Fr. O’Riordain discusses the support for a 32 county Republic and his father’s disappointment with the settlement made in London in 1921. He also talks of the shooting of Michael Collins in August 1922, and the belief that one of Collins’s own men was responsible.

He recalls meeting, at the age of ten, the artist Sean Keating, and he speaks of the artist working on his iconic painting Republican Court, and the venue for this work which was Jack Culloty’s house in Knockavorheen. He talks of his younger years, being surrounded by guns and a live bomb which was ‘part of the family’.