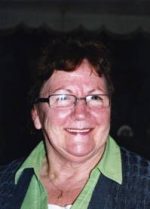 The Hughes family came from the area around Coolcarrigan, which was deeply set into the countryside. Kathleen Doherty’s father’s family lived there in a thatched cottage until they were rehoused close by the Land Commission, and given additional land at Timahoe East. Kathleen clearly recalls watching the Army cutting turf during the war years, and the later establishment of Bord na Móna. The Bord decided to have a village built for the migrant workers who came in their hundreds from all over the country. This village was named Coill Dubh and consisted of 160 houses. The traditions of each county were brought with the migrants, and Kathleen recalls watching GAA games being played between the various counties, and the fierce competition and rivalry which transpired. Some unrest also manifested itself between the local menfolk and the migrant workers, in the area of relationships with the native females. Each summer a festival atmosphere would prevail in the village when Bord na Móna organised a carnival, complete with a marquee, music and fine entertainment. Kathleen emigrated to London where she worked for a short time in the 1950s, but her heart was drawn home, and she settled in Timahoe where she married a Mayoman, and there she reared her family.