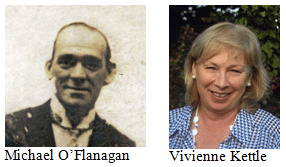 Kathleen Lally begins by explaining how her father, Christopher Nugent, acquired the nickname ‘Bull’. She recalls the occasion at the opening of the Slua Hall in Swords when her father and others wore their medals, and Éamon de Valera performed the opening ceremony. The Nugent family home on the Main Street in Swords is remembered, where Kathleen’s grandmother kept a lodging house. Christopher Nugent was 17 when he joined the Irish Volunteers, along with Willie Doyle who was later to become his brother-in-law. Kathleen remarks that the Lawless family were younger than her father. Thomas Ashe, who taught at Corduff National School, also taught Irish classes near Swords, and Kathleen remembers that her father had a great grá for Ashe. Her father never spoke much about the Battle of Ashbourne she says, and her son Brian explains that Christopher was a member of the 5th Battalion. The men stayed in Newbarn Lane before proceeding to Ashbourne, and his grandfather was alleged to have fired a shot. John Crennigan was killed in the action. Christopher Nugent is buried in Swords but his gravestone bears no indication of his part in the Battle of Ashbourne. Kathleen recalls the fact that the ‘lads’ did not want any inscription on the grave. Brian discusses the history of the Old IRA Commemorative Society which formerly fundraised to help indigent relatives of Old IRA men. Kathleen remembers Tommy Scully, an old friend of her father, who worked at the Lawless farm after the Rising. Brian has a letter to the General Officer Commanding, signed by de Valera. Brian worked as a prison officer from 1967 to 1995, and from 1977 he was stationed at Mountjoy Prison. Comparisons are made between the Old IRA and new IRA. Kathleen discusses her father’s nature, describing him as of fiery character though very straight. Her mother’s family, the Ryans, were not directly involved in the Rising, and both the Ryans and the Nugents supported de Valera. Her aunt, Molly Nugent, lived in a lodge on the Lawless farm and she would hide and feed men on the run. Kathleen tells an anecdote about an event that occurred during the War of Independence. Christopher Nugent was in receipt of the 1916 Medal, the War of Independence and the Civil War Medals. Kathleen discusses her uncle Willie Doyle, who was married to Molly Nugent. She describes a photograph of Willie Doyle, Christopher Nugent, Isaac Dignam, Éamon de Valera, and Colm Lawless. Each is wearing an armlet indicating their 1916 service, later to be replaced by the medal. Willie’s brother, Anthony Doyle, became a member of the Free State Army and rose to the rank of Battalion Quartermaster Sergeant. Brian reflects upon the efforts of 1916 on the men, and on the dreadful effects of the Black and Tan forces on the populace. Christopher Nugent made a witness statement to the Bureau of Military History and applied for the military service pension, which he received from the 1930s. Kathleen recounts an anecdote about the proprietor of a shop in Swords with whom Kathleen’s paternal grandmother had an account. The shop was boycotted and forced to close. Her father did not talk much about his experiences, and Kathleen says that she learned more from his sister Molly. She discusses the fact that after the surrender in 1916, the men were taken from Malahide by train to the city centre and then marched down to the North Wall, prior to their imprisonment. Her father was held in Wandsworth Prison and in Frongoch Camp in Wales. Brian provides detail of events after the Battle of Ashbourne. The brigade returned to Newbarn where they surrendered on the Sunday. They were then taken to Richmond Barracks and on to England. Christopher Nugent was released in August 1916 and returned to active service in 1917. Brian details some of the raids for arms in which his grandfather was involved, in particular that at Connellstown. Christopher Nugent was on the run until the Truce was declared.