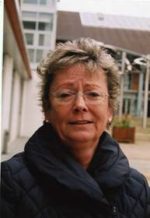 Maírín Gallagher (née McGrath), now resident in Sagra, Spain, was recorded at Tallaght Library. Her mother was Kathleen Fitzgerald from Ventry, Co Kerry. Kathleen qualified as a teacher from Carysfort College in Dublin and later was appointed Headmistress to The Virgin Mary School in Ballymun, where she spent all her teaching life. As a young girl, Maírín would often assist her mother in her duties at the school. Following her graduation from Trinity College, Maírín worked as a chemical supplier in Cork Street for Jim Hayes, who introduced her to Redmond Gallagher, whom she later married. Maírín Gallagher is joined by Ciara Nolan (née Gallagher), granddaughter of Redmond Gallagher, during the recording at Tallaght Library. Life in the Gallagher family, up until Redmond’s death in 2006, is discussed in light-hearted detail. Redmond’s early life at Urneys, his passion for cars and car racing, his various enterprises involving racehorses and cattle, over many years is affectionately explored.