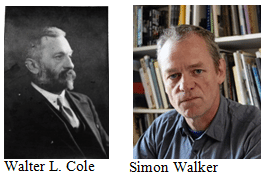 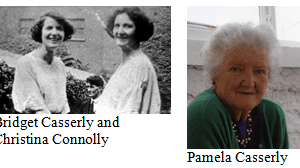 Margaret Matthews (née Colgan) (b. 1923) and her daughter Linda

Margaret Matthews and her older brother, Brendan Colgan, grew up in Ranelagh and in Marino in Dublin. Their parents were Daniel Colgan and Margaret O’Reilly. Daniel Colgan was stationed at Bolands Mills and the Eastern Railway during Easter Week 1916. Margaret’s uncle, Christy O’Reilly, was also active at this time. Her father was not a supporter of Éamon de Valera, she says. A document detailing Daniel’s role during 1916 is read by Linda. Her grandfather joined the Irish Volunteers in 1916 and was released by the British from Wakefield Prison shortly after the Rising due to poor health. He was then to become active in the struggle in various roles. With the formation of the Free State Army, Daniel was placed in charge of the Payments and Accounts Department. Linda reads her grandfather’s resignation letter from the army due to ill health in 1926, explaining that at that stage he held the rank of Commandant. Margaret recalls her father in uniform, and she says that he did not talk very much about his activities in 1916. When he died in 1937 he was afforded a military funeral. Margaret remembers the fact that her brother Brendan did not like the noise made by the guns on that sad day. Linda recalls her granduncle, Christy O’Reilly, who returned from Liverpool to fight in the Rising. Linda reads a statement which details her grandfather’s service in 1916, and his service in the Free State Army is also recalled. He set up the pensions system and Margaret remembers him as meticulous in his work. Linda explains that a photograph of Commandant Daniel Colgan still hangs on the wall of the house in Santry, and the family also has his sword and his medals. She reads a report on the death of Commandant Colgan. After her parents’ death, Margaret Colgan worked as a seamstress, a job she acquired through a family friend. She later met Michael Matthews who fought in WWII. Linda recalls the fact that her father never talked about his time in the army, though an anecdote relating to a miraculous medal which is said to have saved his life is recounted.