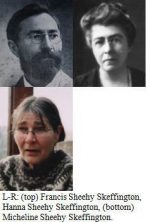 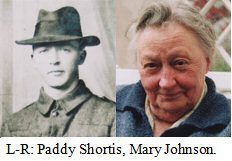 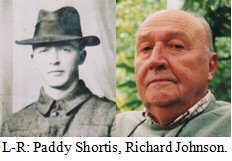 Track 1: Micheline Sheehy Skeffington describes the fundraising trips to America made by Hanna Sheehy Skeffington, the first in December 1916-June 1918, when she was accompanied by her son Owen, then aged 7. The early life of Micheline’s grandfather, Francis Sheehy Skeffington, as a journalist and educator, is also recalled. Track 2: The reasons why Micheline’s grandparents decided that they would be named “Sheehy Skeffington” and the importance of the name itself is explained. An anecdote is told about Hanna, who was a suffragette and a demonstrator. The initial support of Home Rule by her grandparents, (abandoned c. 1911), their pacifist beliefs at that time, and an event during Easter Week 1916 when her grandfather attempted to save the life of a British soldier, are discussed. Micheline explains that his pacifism involved an abhorrence of death in others, not his own. Track 3: The arrest of Frank Sheehy Skeffington by Captain Bowen-Colthurst and Frank being summarily shot by the Captain at Portobello Barracks are recalled, as is the offer of compensation by the British Government to his widow, Hanna Sheehy Skeffington, which she refused. Track 4: Contains a discussion on the passion and drive of Hanna Sheehy Skeffington in her efforts to be allowed into the United States to raise awareness of the Irish fight for freedom (a ‘small nation’ being ignored by the great powers involved in WWI to save ‘small nations’ e.g. Belgium). Her work behind the scenes at the outbreak of the Civil War, in an attempt to halt the conflict, is also discussed. Track 5: Fr. Eugene Sheehy, an uncle of Hanna Sheehy Skeffington, was involved in the Land League. He is recalled by his relative Micheline, who inherited the desk he gave to Hanna to encourage her to study. Her father Owen Sheehy Skeffington’s education in the United States is described. Track 6: Family papers and memorabilia are discussed, as is the Government pension awarded following the Civil War. Micheline reflects on the legacy handed down to her and her feelings of responsibility to that legacy.