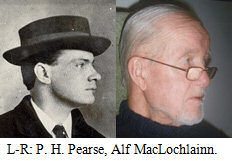 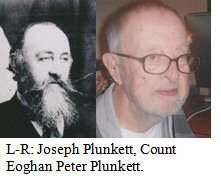 Track 1: The Scarlett family connection to the Pearse family is described: Noel Scarlett’s mother was Florence Pearse, daughter of James Vincent Pearse and grand-daughter of James Pearse Senior, who was the father of P. H. Pearse. Florence Pearse’s marriage to William Scarlett, who joined the Royal Dublin Fusiliers, fought in WWI and later joined the Irish Army, is described. The importance of the family connection to P. H. Pearse is explored, as is Noel’s father’s service in WWI with the British Army. Track 2: Noel Scarlett’s mother Florence’s siblings and their lives are recalled, and he is assisted in this by his son, Ciaran Scarlett. Noel recalls the kindness of Margaret Pearse, sister of P. H. Pearse, and the holidays spent at St. Enda’s during his childhood. An explanation is given on the family relationships; to Noel’s great-grandfather, James Pearse Senior, who married twice: James and Emily were children of the first marriage, and P. H. and William Pearse (and their two sisters) were children of the second marriage. James Pearse Senior was a stonemason who came to Dublin from Birmingham with his family and set up his business in the 1850s. Track 3: Noel Scarlett describes his experiences in the FCA (the Irish Army Reserve) in the 1940s, 1950s and 1960s, the responsibility of the Pearse family connection, and the lack of an official Irish recognition of that connection. The family memorabilia is discussed and the equal importance to him of his father’s British Army memorabilia is emphasised. Track 4: The accommodation provided by Margaret Pearse to the young Scarlett couple on their marriage in the 1950s is described, as is the family resemblance, and the eye defect shared by P. H. Pearse and Noel Scarlett’s grand-aunt and godmother, Margaret Pearse. The 1966 Commemorations are recalled, during which the interviewee was a corporal in the Presidential Guard.