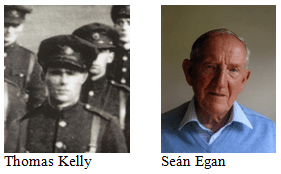 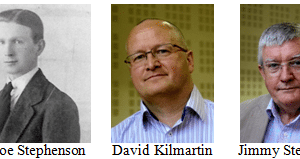 Patrick Green’s father was 18 years of age in 1916. Patrick Green Snr. had joined the Irish Volunteers two years previously. During the Rising, he was with the Four Courts Garrison in North Brunswick Street. He lived in Lower Dorset Street at that time and he married in the late 1930s. His wife, Mary Convey, died in 1943, one year and five months after her son Patrick was born. He was brought up in Donabate by Miss Ivers (‘Auntie May’) at St Anthony’s, along with other children. He had two older sisters who had been sent to the Sacred Heart Home in Drumcondra after their mother’s death, but all the family kept in touch. Patrick knew his father through his visits to him as a child. About 80,000 people claimed the old IRA pension but less than half were approved, Patrick says, and he describes the approval process which took place after the passing of the Military Service Pension Act. He reads from Frank Daly’s statement regarding his father’s service in the IRA, and the transcription of his interview with the panel. This document details Patrick Green’s service in 1916. His son explains that he regularly patrolled the Dublin streets during this time, and that his lieutenant was Jack Price. He was expert in signalling, particularly in morse code, and would teach others, his son explains. He was also in charge of 1stBatt. Company dumps. Patrick explains that his father handed in his gun in 1922. Patrick’s mother, Mary Convey from Dublin, died of tuberculosis. He recalls his maternal uncle Ned who brought the family together, explaining that he did not know any of his father’s family, though apparently he did come from a large family. This was one of the reasons why his father did not take part in the Civil War, Patrick explains, as he did not want to take sides. He was released from Kilmainham Gaol in December 1921, and resigned from the IRA in July 1922 following his refusal to take part in the Civil War. Patrick discusses his father’s difficult life, when he was left with three young children after his wife’s death in 1943. He spent all his working life as a dispatch clerk in Todd Burns, a wholesale draper in Henry Street, Dublin. Patrick’s two uncles, Joe and John, are remembered, and Patrick explains that John worked in the Irish Independent and Joe in the Irish Catholic, while he himself worked at the Irish Press from 1963 until 1995, when the newspaper closed. He then worked with a designer hardware company as their in-house locksmith until his retirement. His father’s autograph book from his time in Kilmainham Gaol is discussed, and Patrick remembers seeing his father’s three military medals which have since been misplaced. His only memory of his father speaking about 1916 was during his visits to Donabate. His father’s patrolling of the streets of Dublin in 1916 is recalled, including the attack on Findlaters and the Freeman’s Journal offices. Patrick discusses his father’s poor health and his death on July 8 1959 at the age of 62. He was afforded a military funeral and is buried in Glasnevin Cemetery. His headstone reads “1st Batt. Dublin Brigade Old I.R.A”. The forthcoming centenary of the 1916 Rising is discussed. Patrick remembers his father as a good man who attended church regularly. He remarks that not all of his relatives are particularly interested in the family history, just as he himself was not in 1966 during the 50th anniversary events.