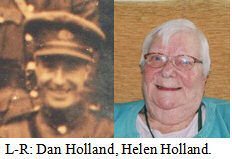 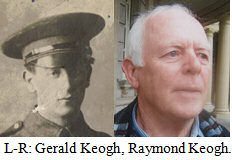 Track 1: The Hurley family background in Drinagh, Co. Cork, and Patrick Hurley’s mother’s connections to the family of Michael Collins, are described. Patrick Hurley’s posting in 1922 to Balbriggan, Co. Dublin, as a member of the Free State Army is also discussed, as is his involvement in the attack on the Four Courts. Track 2: Richard Hurley describes events during the War of Independence in Balbriggan during which his mother, May Chute, and her two sisters, were terrorised by the Black and Tans. He also recounts stories of his father’s arrest of members of the local IRA during the Civil War. Track 3: The difficulties encountered by his father because of the arrests of the local IRA men, and the later healing of wounds due to his involvement with the Fingal Old IRA Men’s Welfare Society, are described. Track 4: The meeting of Richard Hurley’s parents, both of whom were members of the Gaelic League, is described, and his involvement in playing with The Pioneers GAA Club is also discussed. Tracks 5-6: 1916 Commemorations which Richard’s attended with his father, and his own involvement with work carried out on the 1916 memorial at Arbour Hill, prior to the 1966 Commemorations, are all described.