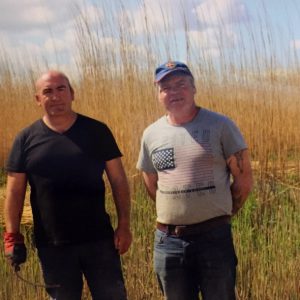 Thomas was born in 1931 and grew up in the parish of Kildysert, on the banks of the Shannon, in the townland of Cappanavarnogue. He speaks of his grandfather, Michael and Michael’s brother Tom, who both farmed the land at Kildysert, which was subsequently passed on to his own father, Thomas. He describes the pier head in Kildysert, which was constructed in 1843, saying that this was the place from which emigrants departed for America and Australia. Thomas’s own aunt Mary and uncle Tom and their children left from here in 1912, bound for Australia. Near to Thomas’ home is the country house once owned by the Scott family, which later became the Columban Sisters Convent. Thomas describes the neighbouring islands on the Shannon river, recalling their inhabitants and the transporting of cattle to and from the islands. Other topics discussed were fair days and the old method of threshing corn using horse power.