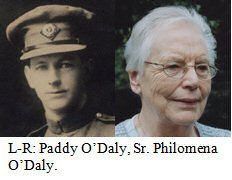 Track 1: Áine Caffrey (née Sweeney) explains her relationship to Michael O’Hanrahan, excecuted after the 1916 Rising. The Wexford and Carlow backgrounds to her O’Hanrahan family, and growing up with the awareness of her family’s important part in the Rising, are discussed. Track 2: Áine states the reasons why she feels that the people involved in the 1916 Rising did not generally discuss their experiences, comparing this to the hurt felt in the aftermath of the Irish Famine (1845-1852). Mention is made of her father, Alphonsus Sweeney, who was a runner for the Volunteers in Naas in 1916. She talks of growing up as a member of the O’Hanrahan family and her pride in the name is revealed. Track 3: The 1916 commemorations down through the years, the involvement of her family and the importance to her of the family memorabilia, are all discussed. Men who fought in the trenches during WWI are remembered, along with family members who were involved in the Rising. Tracks 4-5: Three generations of the O’Hanrahan family who fought for their country are discussed. A document received from the Military Archives, bearing the testimony of her father, is examined and discussed by Áine Caffrey, and she also details her family background. Her father Alphonsus Sweeney’s involvement in the antiquarian book trade and in auctioneering is also discussed.